Every year for Thanksgiving, we take a long weekend and go skiing. In Canada. The irony of celebrating American Thanksgiving on Canadian soil isn’t lost on any of us. Like many things about our life, our family has decided to embrace the unusual and we have made Thanksgiving in Canada our own. This year, as my husband and kids were bombing down the most amazing powder runs (and I was wallowing in the holes I made by falling while lagging behind them) I got to thinking about how much our life is like our Canadian ski trips.

First, there will always be misadventures along the way. This year, we packed all the skis, boots and snow gear into the cargo box, threw the kids in the car and drove the five hours to Whistler. Only to realize that we neglected to bring a key to said cargo box. And we didn’t have Canadian cell service. Or internet. Or a phone book. Or shoes, as two of us wore flip-flops and slippers in the car. Last year, the misadventure was a sick, sick kiddo. The trip before that, my daughter and I had to hike up a run in ski boots, carrying our skis after we hit a point that required jumping a rocky, cliff-like area to keep going. Just like life, something always happens.

In my world, it was losing my career to “unexpected complications” and learning to navigate a life lived at a slower pace. I left a career that made a tangible difference in people’s lives. It took me years to regain that sense of purpose and community, to realize that there is value in small acts of kindness, and strength in perseverance, even if the end result is running a short race with my kids instead of running a marathon

While skiing, at some point, you will get stuck. I was following my family on Saturday. My husband flew to the bottom. Then my son, then my daughter. Then me, until…poof…tumble….flop. I was face-first in deep, deep snow. I managed to flip over to my back somehow. I’m still not quite sure how, but I think if you picture a fish on a dock, flopping around, then put the fish into white snow pants, a green jacket and skis, it would look like me. So, I got to my back, only to plant my skis straight into the snow. There I was, skis buried to my boots, looking up at my ski tips. I think there was a ski pole under me somewhere. My bindings were buried in snow. I was going nowhere. People on the chairlift above me were giggling. I could see my family at the bottom, and heard “Are you stuck?” Yes. Yes I was.

Five minutes later, my 12-year-old hero in bright green ski pants climbed to my rescue to help pull me out of the hole. Later in the day, he skied into some gnarly trees and my husband helped him back out. Later still, my daughter skied into thigh deep snow and we all had to pull her out.

Like life, we all need a little help sometimes. After my first surgery, I was one hundred percent determined that nothing would change. I would work, parent, manage medical devices and deal with pain by telling myself it was mind over matter. One night, my husband and I went to a concert. I felt lousy, but didn’t want to ruin his night, so I took (so many) deep breaths and made it through the beginning of the show. Until I couldn’t stand up. I was in enough pain that I was literally stuck in a chair, rather than the snow. That night, as he carried me through downtown, I realized I was going to need some help along this journey.

Some of my best memories from skiing come from the misadventures, mainly because we’ve learned to laugh along the way. As my daughter and I crested the top of the Whistler Bowl trail last year, boot packing up and carrying skis while people flew past us the other direction, she threw herself on the ground and panted out “I’ll never….complain….about hiking….again!” I was doubled over, laughing in the snow.

This year, while she was standing in thigh deep snow, my husband skied up and said, “Wow! You were flying! You’re such a little ripper now!”

“Daddy, did you just call me a little stripper?” Cue the laugh track, in the snow. 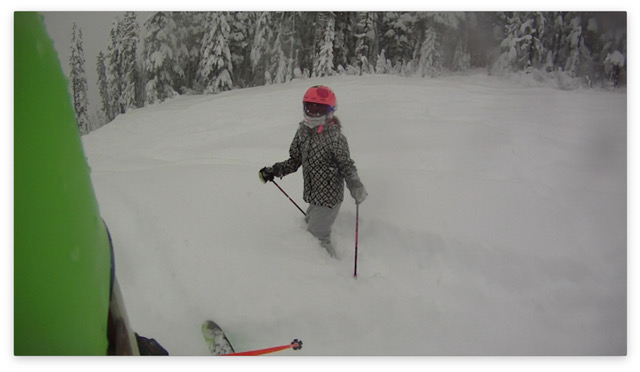 Like skiing, life is better when I laugh, even (and maybe especially) if it’s at myself. While my husband was carrying me home after the concert, he started randomly commenting about my ankle. “We’ll get some ice for it! Your ankle will be ok!” I was a little out of it at the time, but later I asked him what he was talking about. He told me that people were staring and he didn’t want anyone to think he drugged me in a bar. I laughed so hard I fell down. I still occasionally lean on him, hop and say “my ankle!” just for fun. (Pro tip if managing a health problem: Leave an event before your husband is concerned about being stopped by police and accused of assault.)

The last thing I’ve learned from falling and flailing and failing, both on the ski slopes and in life is to take a moment and appreciate the view. While my daughter and I were collapsed in the snow, exhausted from our hike out, we took a moment to admire where we were. We were back at the top of the aptly named Peak Chair, an easy chairlift ride to a pretty view. But once we had hiked it, boot packing the trail with (a lot of) sweat and effort and heart, we took a moment and took it all in. The view was astounding. We were touching the top of the world, surrounded by jagged peaks and blue sky.

It’s like that for me for every hike now, for every ski day and every run. Maybe I would have gotten to this point anyway, where I would hold every adventure a little tighter, value it a little more. But I think for me, I’ve learned to value the moment and take in the view, surrounded by people I love because it’s been a tougher climb to get here.